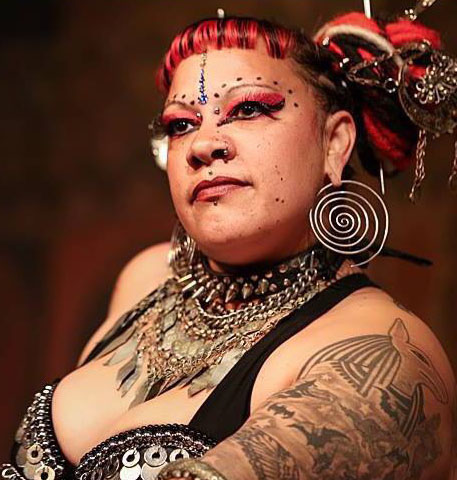 Marjhani has been a pioneer of Dark Fusion/ Gothic Improv dance for over a decade. Starting as a Traditional Tribal Style Dancer over 15 years ago and having been a Deathrocker for over 3 decades, she has been a true pioneer of the Dark Fusion Format, and always aims to fuse both the traditional and more modern aspects of the dance. She was one of the first dancers to bring belly dance to the Gothic/Industrial Dance Clubs of L.A., Orange County and Riverside County in the early 2000's.

Marjhani directed the dance tribe, Oojahm, at the Original Renaissance Pleasure Faire in Southern California for several years and directed Scarlett's Nightmare in 2010 in Lancaster, CA. Over her dance career Marjhani has taught and performed around the globe and was even featured on several television shows including The Girls Next Door and Wealth TV. Her love and passion for the dance outweighs everything except her love for her children.

$35 before June 15th / $40 after The art of gooey movement with strong accent. Learn the fundamentals of hard hitting accents coupled with ooey gooey goodness. Exercises and drills will be covered to help you get those clean isolations that give the right amount of pop to a performance.We will cover how to easily transition from one to the other to keep your audience guessing at what comes next! All levels are welcome. Please bring water and a yoga mat or knee pads.